In this modern day and age, a lot of people have zero problems drinking water from the tap. That being said, that does not mean that your water supply is completely flawless. In fact, water can sometimes taste unusual.

One of the common problems you may encounter is water having a metal taste. So, what causes a problem like this? And is there anything you can do about this metal taste? Be sure to read on to find out.

Why Does Water Taste Metallic?

Your water supplier can add a number of chemicals to your drinking water. Naturally, these chemicals are safe to drink under current laws. That being said, certain chemicals put inside water can react with your plumbing and give your water a metallic, bitter taste.

One of the chemicals that can react with the plumbing in your home is chlorine. In fact, some homeowners will not describe it as a metallic taste, but as a chlorine taste. In this case, the cause of the metallic taste is pretty obvious.

In addition to the interactions of chlorine, there are minuscule amounts of metals in your drinking water. These trace metals often come from plumbing; this can include copper, iron, lead, nickel, and manganese. If your plumbing is relatively old, this could also explain why your drinking water tastes like metal.

So, what about people who live in newly built homes? Does this mean they cannot get water that tastes a little metallic? They still can. However, the cause is often down to chlorine interaction or due to the fact you are getting so-called soft water.

How Do I Test My Water Supply?

When you want to test your water supply, the first thing you need to ask yourself is what will you be testing your water for. There can be many contaminants in the water, even in water that is considered safe for consumption.

There are independent services you can obtain to test your water supply, which can provide you with a detailed overview of contaminants over the course of time. In addition to that, you can also obtain individual test kits, which can test your drinking water for certain chemicals such as chlorine, but also for pesticides, lead, and bacteria.

Before you use a test kit, it is certainly recommended to test the accuracy of the test kit and its reputation. Not all test kits are accurate, and some have a poor reputation when it comes down to delivering accurate results. So, always check out the various options online before you commit to a specific brand. 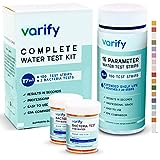 What Can I Do If My Water Supply Has A Metallic Taste?

While a metallic taste in the drinking water can be an inconvenience for those who drink their tap water, it usually is no cause for concern. Your drinking water provider has to test your water supply on a regular basis, so drinking water should always be safe to drink.

Replacing the entire plumbing system inside your home can be quite an investment, but for older homes that is usually one of the solutions that will be put forward. That being said, metallic water may be limited to one of the taps inside your home. In this case, you need to look at the problem in a more local manner.

When a specific tap in the home is responsible for producing water with a metallic taste, it is a good idea to look at taps that contain either a synthetic or a non-phenolic washer.

You could also choose a tap with a higher-quality filter, which enables the removal of those trace metals we mentioned earlier. It can also be an alternative to replacing the entire plumbing system in your home. That being said, always consider that a filter on your tap can only do so much, especially if your home’s plumbing is quite old.

What If The Metallic Taste Is Not Caused By The Water?

Taking certain vitamins and supplements can have a similar effect on the body. For example, if you take a multivitamin with lots of copper, zinc and chromium, then a metallic taste in the mouth could most definitely occur.

When You Should Speak To Your Doctor

If you have eliminated the possible causes of the metallic taste in your drinking water, and if it is a problem you alone seem to experience, it is always best to speak to your physician.

Remember, a metallic taste can have an underlying cause, which can be medical in nature. So, when in doubt about the cause of the metallic taste, always get checked out by a doctor to rule out any serious conditions underneath. 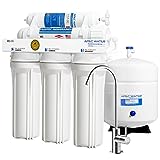